The Tapestry of Love, by Rosy Thornton. A Review by Debra 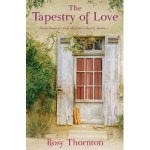 There are very few times I can remember where I've actively prolonged reading a book by putting it down at intervals and resorting to other things, just to make it last. I couldn't help myself with The Tapestry of Love, a new book by author Rosy Thornton.  I sincerely tried to draw the experience out for as long as I could, but alas, all wonderful reads must come to an end.

The Tapestry of Love is Catherine Parkstone's story. An Englishwoman set to begin her life anew in the Cevannes region of France,  Catherine finds herself in the middle of her new town's autumn transhumance, the moving of sheep from their summer grazing ground back to their home farms and enclosures; the exact opposite direction in which she is figuratively traveling. Leaving England behind, along with her son, daughter, ex-husband and her mother who is afflicted with dementia, Catherine moves to Le Grelaudière, and her new home, Les Fenils, set back in a rocky outcrop with few of the conveniences she's left behind.

Usually, the lead protagonists in a novel are the main focus, but here, they share top billing with the house, the gardens, the weather, the woods, farms and animals and even the mountains themselves.  I could perfectly envision Catherine's new surroundings as if I had moved into Les Fenils as well,  working beside Catherine in her new garden or handing her the thread and needles as she tries to establish her new business.

The secondary characters in the guise of neighbors add a whole different dimension to the story. We get to know each family's back story as any new neighbor would; over time and over tea (and this being France, a little wine as well). Among these neighbors is Patrick Castagnol, with whom Catherine thinks she may have found a good friend and perhaps something more, until her sister Bryony comes to stay.  This is the only point in the novel where I had some trouble understanding Catherine. She closes her eyes to  the relationship between Bryony and Patrick, and she does not ask because she fears the answers. Why did she not fight for Patrick?  What is it about her relationship with her sister that causes her to back off? When Patrick makes clear to Bryony that there are things in his life that he will not share, she goes back to England, leaving the way clear for Catherine and Patrick to find each other again, or not.

The story is ultimately about one woman's growth in mid-life, a time when some women are settled, and all they are is all they will ever be. We read about Catherine's struggles with a new country, a different language, customs and regulations, including a light-hearted tutorial on French bureaucracy and the problem of dealing with the establishment of a non-agricultural business in a National Park and the effects on that park's population (which I found personally fascinating). The twice yearly transhumance is a metaphor for Catherine's new life, as is her decision to take on the restoration of a medieval tapestry. She takes on this challenge as she has almost every challenge since her move to France, and masters it as she does her new environment, creating something worthwhile where before there was nothing.  It's positively inspiring as Catherine overcomes political and practical obstacles to complete her own transhumance.

Beautifully written, Rosy Thornton again delivers a story rich in detail, not only in its character development, but in setting as well. I was caught up in Catherine's world, enough so that I too caught a whiff of jasmine on that hillside.

The Tapestry of Love is highly recommended.  It is exactly what my father meant when he told me years ago, that reading a good book transports you  to anywhere in the world. I did not want to come home.
Posted by Unknown at 2:35 AM 1 comment:

Seven Secrets of Seduction, by Anne Mallory. A Review by Debra

I can honestly say that in all my reading of romance novels over the years, I have never been totally and truly seduced by a fictitious character until I picked up this novel. It's always fun to watch a rake reform, but in this case, the author puts forth a seduction so all-encompassing and emotional, that you spend the entire book envying Miranda Chase, "lowly" shopgirl and correspondent to not one, but two literary figures, who becomes the recipient of Maximillian, Lord Downing's attentions.

Miranda, like all of London, is enamored of a new book entitled "The Seven Secrets of Seduction," written by the author who calls himself Eleutherios. She strikes up a correspondence with the author himself, while at the same time, defends him to a Mr. Pitts, a critic who seems to have a reason to hate Eleutherios and his work. Miranda becomes the central focus of this triangle, writing to both men for a period of time, and receiving life advice from Mr. Pitts and reading material and romantic prose from Eleutherios. She then finds herself the recipient of Maximillian's singular interest.

Maxim seeks Miranda out in her uncle's bookshop and at first we are convinced that this is a random meeting. We are as stunned as Miranda when Maxim seeks her out for special attention, even engineering an excuse to have her work in his library. We watch Miranda fall prey to what we think is a practiced and random seduction. And we are terrified that she will succumb to this seemingly cynical and jaded rake. Miranda even recites a mantra when she is with him: Flame, Moth, Danger. She knows how much trouble she is in around Maxim, but she can't help it. His seduction is so perfect and so complete, that she has no choice in the matter.

When the author switches the story's point of view to Maxim's, things become almost painful for the reader, but not in the way you would expect. We see the spider caught in his own web, as helpless to escape his feelings as his prey. Maxim is more than what he seems. Much more to Miranda in fact, and once she pieces the parts of the puzzle together, she can't help but make a decision that will change the course of her life forever.

And damaged by his parents' relationship, Maxim swears he will never marry for love, but with Miranda, he finds that a loveless marriage combined with a mistress he loves results in an untenable situation.

Anne Mallory writes with a distinct descriptive flair. There are numerous instances where we are given a description of the tactile things these two do... a swipe of a hand down a silk dress, the motion of restless fingers over a desk or a quill.  All these things, plus a powerful and emotional story line, put this reader right in the story. I wanted to be Miranda. What woman (or man) wouldn't want to be the subject of such abject love and devotion?  And it works both ways.  Miranda says that Maxim is "just like a walking addiction." Maxim realizes that he cannot let Miranda be hurt, but he cannot let her go, and that he needs her more than she needs him. It's a painful revelation to a man obligated by duty and family history to reject the obvious course of action.

Seven Secrets of Seduction is just out in paperback. It brings back memories of how it feels to begin a new relationship, and to  fall in love.... that agonizing and exhilarating phase of life where feelings can't be taken for granted and nothing is ever easy, but the rewards are beyond wonderful. You'll experience it again as you read this book.
Posted by Unknown at 9:02 AM 7 comments:

Sugar Creek, by Toni Blake. A Review by Donna

Welcome back to Destiny, Ohio where the air is clean, life is apparently uncomplicated and hunky men are thick on the ground. In Toni Blake's new release, Sugar Creek, we meet another alpha male (remember Mick Brody?) with all the attributes of the perfect romance hero.

Mike Romo is tall, dark, handsome and in uniform. A cop's uniform, that is. And he's determined to keep Destiny safe. That includes stopping Rachel Farris as she does twenty over the limit just outside of town. Rachel is now a city girl, summoned back to Destiny to help her elderly grandmother harvest the family apple orchard. Sparks fly as Officer Romo hands Rachel a speeding ticket along with a case of unrequited lust. Or so she believes. But Mike is not as unaffected by her sudden reappearance as Rachel thinks.

Unfortunately, the Romos and Farrises are Destiny's version of the Hatfields and McCoys. A long ago betrayal by Mike's grandfather Giovanni drove Edna, Rachel's grandmother, to take action - and the apple orchard. Bad blood has been flowing between the families in large cascading rivers for two generations, although Edna has come to depend on Mike, despite his last name. And Mike has a soft spot for Edna.  But Rachel believes Mike is only in it for the apples and vows to protect her grandmother and the family business from all things Romo.

Rachel and Mike circle each other for days, denying the unwanted attraction until they are thrown together in a small concession booth during a town event. Surprisingly, they work well together, serving snacks to the good folks of Destiny, but the real spirit of cooperation begins after the event is over. I'm not sure where Ms. Blake derives her inspiration, but a couple of hallelujahs are certainly in order.

But both Rachel and Mike have issues beyond the infamous family feud which threaten to derail their tenuous relationship almost before it begins. Rachel returned to Destiny reluctantly and only temporarily - she has a high powered job in Chicago and a life purposely different from her small town upbringing. Mike is still dealing with a horrific family tragedy that shapes every feeling he has and every decision he makes. And as if this colorful tapestry wasn't enough, Ms. Blake adds even more by weaving Edna and Giovanni's story in, out and between Rachel and Mike's.

Ms. Blake is a master at slowly drawing her protagonists, allowing the reader to feel each character's struggle to accept a particular truth. She did this brilliantly in One Reckless Summer, the first in the Destiny series, and succeeds again in Sugar Creek. There is a lot going on in this book and while less emotionally wrenching than its predecessor, it is more complex. It took more effort to get to the heart of the matter but once I was there, I was enthralled, swept away and completely won over.

Sugar Creek gets an enthusiastic two thumbs up. It's exactly what I've come to expect from Ms. Blake - and a certain must have for your romance library.
Posted by Unknown at 5:36 AM 4 comments: