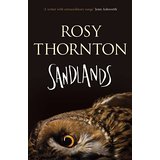 I would imagine that it must take a very special creative ability to put together a book of short stories that holds the attention of readers who normally love their novels long and involved. The secret to a successful compilation of short stories under one cover must be that each individual narrative tell its complete story in what would normally be one chapter of a regular novel. It must draw the reader in and keep them there, and include character and story line development in a matter of just a few pages. Rosy Thornton has successfully mastered this art in Sandlands. Each story's end was like closing the back cover of a full novel. I had that satisfaction that comes from a good read over and over again in reading this book.

Each short story in Sandlands reveals some aspect of Suffolk life. The only way I am familiar with this part of England is actually through a series of detective stories written by Elly Griffiths, so this was an interesting way of rounding out my education, so to speak.  Ms. Thornton brings the Suffolk countryside to life in each and every story.  Nature is an ongoing theme throughout the book, and each story hits on a different aspect of life in this part of the country. Stories of flora, fauna, history, family, generations, myths and legends, war and peace, witches and the occult, are covered in individual and engaging ways. There are certain locales, like Silly Hill and The Ship tavern that run in and out of the narratives, and the stories on the whole give the reader an excellent feeling for what life is like here, both past and present.

My favorite stories revolved around generational themes, especially those drawing on the history of the area during World War II. Each taken on its own merit engages the reader into thinking about things that seem magical and make-believe, but in this corner of the world, might actually be possible.

It's a highly recommend from this convert to the short story format.
Posted by Debra at 2:00 PM 1 comment:

Everyone Brave is Forgiven, by Chris Cleave

The two conflagrations that defined the first half of the last century have become my new reading fodder. I've read Erik Larsen's brilliant send up of the sinking of the Lusitania, Dead Wake (highly recommend by the way), a few historical fiction pieces from post WWI, including Jennifer Robson's After the War is Over and Moonlight over Paris (two more I highly recommend) and have just finished this amazing effort by Chris Cleave, an award winning British novelist who captures the essence of war time 1940's  London as if he were there, and his readers right along with him.

Everyone Brave is Forgiven is, at the surface, a love story.  Mary North, daughter of an aristocratic family, feels the call of service when World War II breaks out in Europe, and signs up for what she thinks will be an active role in keeping the home front safe. She is, instead, assigned the task of filling in for teachers called up to fight. At the age of 19, she is asked by her supervisor and lover, Tom Shaw, to establish a school for the children left behind in the evacuation from London. These children are the "undesirables," unwanted by the country folk asked to house them, and she gladly takes on the task. When her efforts run up against the London Blitz, it spells dire consequences for all.

At the same time, the story follows Alistair Heath, Tom's roommate, who joins the British Army, spends time fighting in France and after a hasty retreat brought on by the German insurgence, finds himself stationed on Malta, during the siege which lasted from 1940-1942. Starved and injured, he can't forget the one girl who wasn't his to remember.

The juxtaposition of the Blitz with the siege, and the devastation wrought by both is the backdrop to the social lessons Cleave imparts with his writing. Race, friendship, and class are all fair game here. And through his characters, Cleave very cleverly asks these questions: Is there any positive outcome of war? Does it change society? Does it make people more tolerant, more open to differences among them? More willing to forgive? More willing to help and get involved?

Cleave's flowing prose and anecdotal phrases make the reader stop, think, and try to answer those questions. This is the perfect example of a novel that is, on the surface, an arresting fictional account of a few lives during a very trying period of time, but is in reality, a more thorough dissertation on humankind's tolerance for hate, evil and war.