To Beguile A Beast, by Elizabeth Hoyt 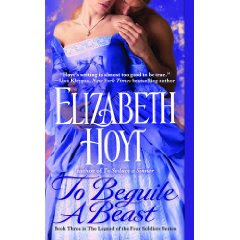 Reader beware, once you start this book you will have multiple problems putting it down! I packed it to work with me, and had to wait until lunch to crack it open and continue. This is such a spell-binding tale, you won't want it to end!

To Beguile a Beast is book three in The Legend of the Four Soldiers series. The beast is Sir Alistair Munroe, an acclaimed naturalist who found himself with the soldiers of Spinner's Falls when they were ambushed by Native American warriors. Sir Alistair was among those who watched their comrades be tortured, and endured torture themselves. He is disfigured; missing an eye, a few fingers, and has several scars on one side of his face. Children and women scream at the sight of him, so to avoid such uncomfortable occurrences, he hides in his castle, away from the world and anyone who might pity him. His life is spent in solitude, writing about nature and illustrating what he sees, until the day the lovely Helen Fitzwilliam and her two children knock on his door on a rainy night.

Helen, the former mistress to the Duke of Lister, is on the run. The Duke is possessive, and she longs to be free and out from under his thumb and the control he has over her life. The Duke does not like for his possessions to run off without his permission, so Helen, with the help of Lady Vale, presents herself to Sir Alistair to be his housekeeper with the hope that the Duke would never find her at such a remote location in Scotland. She and Lady Vale have created a back story, where Helen is a widow and looking for employment as a housekeeper. Lady Vale doesn't relate to Helen that Sir Alistair is a recluse and has a castle that hasn't seen a broom in well over twenty years. Helen is determined to make the castle habitable, and sets out to win over Sir Alistair and his uncivilized manner towards everyone, even after he banishes her from his home.

Sir Alistair is taken aback, to be sure, but a growing fondness for Jamie and Abigail, Helen's children, and his attraction to Helen herself, starts him on the path to becoming human again. Helen is also drawn to Sir Alistair; ignoring his scars and flaws, she sees the man underneath and realizes that he can see the woman hidden inside. Their mutual desire for each other plays out beautifully as they give in to their longing. Their relationship is strained when the children are taken by the Duke, and Helen is forced to reveal her true story. They both head to London to rescue the children and Sir Alistair is determined to find out a little more about the traitor of Spinner's Falls. In a comical scene, where Sir Alistair outsmarts the Duke by forcing him to disclaim his children in front of His Majesty King George, the children are rescued and returned to their mother safe and sound.

There are so many things I could say about this book. As always, Elizabeth Hoyt's characters are intriguing; they are flawed to perfection and written in such a spell-binding way that you cannot help but be drawn in and fall in love with all of them. This book will be available in April of 2009, so be sure to pick it up!
Posted by Unknown at 3:22 PM