Ten Ways to Be Adored When Landing a Lord, by Sarah MacLean. A Review by Debra 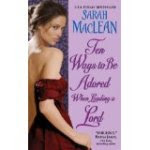 This was the first thought that crossed my mind when I put my Nook to sleep on this book for the last time.  All that angst, all that heartache could have been avoided and the happy ending gotten to so much sooner, if Lady Isabel Townsend and Lord Nicholas St. John didn't have major trust issues, brought on by unhappy pasts. His problem stems from his role as the Bulan, or the Hunter, assigned by the Crown to track fugitives, spies and missing persons of interest to the British Empire.  His last assignment landed him in prison because he fell in love and trusted the wrong person. Couple that with an unfaithful mother who deserted her family without a backwards glance and you can see where he's coming from.

Lady Isabel had a father who was known as the Wastreal, a man who gambled and played his way through life and his fortune, leaving his children  (in addition to Isabel there is her brother James, the ten year old heir) and his wife to fend for themselves in the Yorkshire countryside. Isabel is still reeling and trying desperately to raise her brother, keep Townsend Park intact and harbor runaway women at the same time. A tall order for any heroine, surely.  Bring these two damaged souls together and watch the angst and sparks fly. And fly they do.

Lord Nicholas longs to escape the marriage minded mamas of London after being awarded the accolade "Landable Lord" by a popular magazine. When the Duke of Leighton assigns him to a special project, he jumps at the chance to head north.  His arrival in Yorkshire is noted by Lady Isabel, who is aware of his new moniker but is more interested in getting Lord Nicholas, a noted antiquarian, to appraise her statutes than she is in getting him to the altar. Nicholas refrains from telling her the real reason for his visit to her home, and thus ensues a series of misunderstandings so convoluted,  it is a miracle that the two of them actually like each other enough to fall in love.

Sarah MacLean paints a wonderfully colorful portrait of her characters in this novel.  There are way too many stubborn moments for Isabel, and I began to think that Nicholas was a saint to still want her, but conflict does make a happy bedfellow, especially when there is an overabundance of make-up sex. These two, suffice it to say, do a lot of making-up.  You're just brought to the point where you are wondering how much more Nick can take when Isabel finally asks herself the same question and confesses to her love for him. But is it too late?

As an aside, I just need to mention that the best line of the book (and there were many good ones) and the one that embodies the very essence of the reformed rake, falls to Lord Gabriel St. John, Marquess of Ralston, Nick's twin brother. While trying to console Nicholas, he says, "You are laboring under the mistaken impression that their  job is to need us. In my experience, it is almost always the other way around." I love this line. It's the basis of why I love romance novels. And why I loved this one, too.

This book is a sequel to Nine Rules to Break When Romancing a Rake (Gabriel's story) by the same author, and together they are both fun, lively reads. Each will have you heaving a satisfied sigh when you're done. There's nothing like a good story to make for a happy ending.
Posted by Unknown at 4:00 AM