Love and Other Scandals, by Caroline Linden 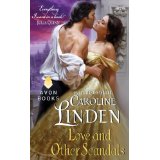 Caroline Linden is one of my favorite Romance authors, and the reason why is clear in one page of any of her novels. Her writing is intelligent, her characters strong, witty and yet vulnerable at the same time, and all of her stories come with a cast of characters each worth a story of their own. Love and Other Scandals is definitely not the exception to this rule.

Joan Bennet first meets Tristan Burke, Viscount Burke, when her brother Douglas brings him home for a school holiday. In a prologue worthy of an entire chapter, Linden sets the scene for the coming years, and the future interactions between an orphaned and unloved young Viscount and a headstrong, not quite fashionable young lady. The real story begins when Joan is 24, an almost "on the shelf" spinster with strong ties to her mother's unerringly strict rules of behavior and dress. At first, Tristan is intrigued by Joan's impertinence, and can't help but give back as good as he gets from her. As he spends more time with her at the behest of her brother Douglas (who I'm hoping gets a story of his own), things change, and what was once unattractive about Joan begins to draw Tristan nearer.

The story is more than the typical romance of this genre. In each other, both characters learn to accept themselves for what they are, while at the same time, growing in ways they hadn't imagined. Tristan learns that he is deserving of love and that his reputation does not have to define him. Joan learns that she doesn't have to depend on her mother for guidance, and that she can find her own voice, be it in the clothes she wears,  her choice in reading material (think 19th century version of 50 Shades of Grey), or the man she chooses to love.

Great characters, good story and a very lovely ending that is really a beginning for these two. Well done, Ms. Linden, as usual. Highly recommend.
Posted by Debra at 8:00 AM No comments:

When I Find You, by Dixie Lee Brown

"If I were you, I'd find someone I could trust and stick with him ..."


Darcy may not be married to the mob, but she's close enough to feel the pressure. Too close. So when her boss becomes the victim of a professional hit and she's forced to run, she heads for the relative safety of home.  But being on the lam is just a bit more complicated than she thought because now there's not a soul she can trust. Not Grant, the good looking law student who offers her a lift. Not Cooper, the U.S. Marshall assigned to her case, and certainly not Walker, the rogue combat vet who claims to be one of the good guys. But surviving means she has to trust someone and Darcy picks the one man who seems the most interested in keeping her alive. And while she may be physically safe - for the moment - her emotional safety is far from secure.

Ms. Brown has a way with suspense; I didn't know who to trust either, up to almost the very end of the book. Her writing is precise, with just the right amount of snappy dialogue laced with humor and heat. Ms. Brown is adept at changing the point of view between the characters, particularly Darcy and Walker - and especially later in the book, when things were really rocking and rolling. This made up for some confusion in the first few chapters, when Ms. Brown backs up over the plot from the two different POVs. The technique is distracting as Darcy's desperation calls for nothing but rapid forward progress. Not a value add in terms of the story and, IMHO, it would have worked better without it. Despite all that, I adored the characterizations. Darcy's hidden strengths surprised me, while the hero's humanity and honor won me over completely. I loved the story, loved the characters and loved the book. Edge of your seat stuff, folks.  Well done!

Posted by Anonymous at 7:00 AM No comments:

Holly Brennan has no idea what she's in for when she steps on a plane coming back from a business meeting in Toronto. When she's seated next to Logan Montgomery, she catches his slight whiff of disdain over her body, and the logistics of sitting next to an overweight woman. Logan, a personal trainer with his own gym, impulsively takes Holly on as his "project," which results in so much more than Logan's own version of The Ugly Duckling with a little Pygmalion thrown in.

Filled with humor, a little kink and a lot of personal growth, Big Girl Panties is an oddity in today's contemporary romance genre. While Holly does lose weight and get into shape under Logan's tutelage and her own perserverence, she does remain against type, and that's what makes this novel so endearing. One would think that all the personal growth was on Holly's side. After all, she has to overcome isolation, loneliness, guilt over her husband's death, and a horrid upbringing, in order to curb her emotional eating. That's all fine and expected in this kind of story and Holly does do a superb job doing just that. But Logan too, needs to put his big boy shorts on and grow up. His growth comes from realizing that he can move beyond his own image others have of him (and what he has of himself), stop caring about what others think, and learn to not only think for himself, but put aside everything else to gain his own happiness. I enjoyed Logan's awakening more than I did Holly's, actually.

The novel is filled with good advice on emotional eating and fitness, probably not intentional as they fit totally into the story, but I got that out of it as well. The only recommendation I have is to cut Chase and Amanda's backstory to a minimum. I'm unaware if these two have appeared in a previous novel, although I have a feeling that would explain why they get so much "press" in this book. If that's the case, and even if it's not, I really didn't need to know the details of their early relationship. Hey, whatever works! I don't think the two or three pages explaining their back story was necessary. One or two sentences could have done it. At times, their narration took away from Holly and Logan, and that's a pity. While an interesting secondary couple, their story should not impinge on the main event, especially when the main event is so darn good!

Really good contemporary romance with more than one twist. I highly recommend it.
Posted by Debra at 6:54 AM No comments: