How to Abduct a Highland Lord, by Karen Hawkins 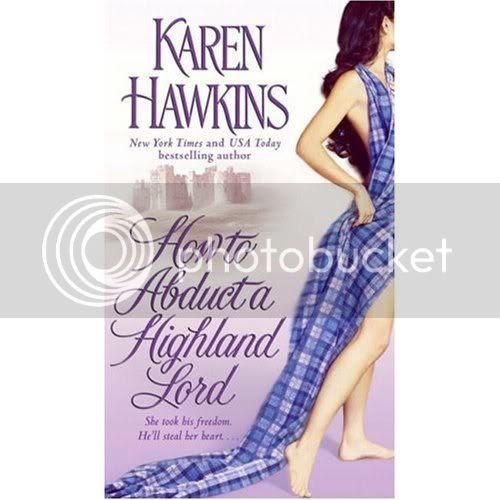 Fiona MacLean gets more than she bargained for when she drags a drunk and unconscious Jack Kincaid to the altar in Karen Hawkin's tale of passion and hilarity. This book will make you laugh out loud at times, so beware!

Fiona knows the only way to end the centuries year old feud between the MacLean's and the Kincaid's is to make them all one family. Her youngest brother is dead, supposedly at the hands of the Kincaid's and her elder brothers want revenge for his murder. In Fiona's haste to save her family from another death, she plays pregnant and marries "Black Jack" Kincaid, a Scottish lord with a scandalous reputation. Jack is no stranger to Fiona, having almost married him 15 years before, only to call it off when she found out about his mistress. Despite her better judgment she and her manservant haul a drunk Jack before the church and they are married. Fiona knows that marriage to Jack won't bring about the end of the feud, but a child born of them will.

Needless to say, Jack is not thrilled at the turn of events. The entire evening comes back in full force and thus their marriage gets off to a rocky start. Jack wisks Fiona off to London, hoping to be able to annul the marriage and get back his own life of gaming, women, and drinking. But Fiona has other plans. She plans to make this marriage work until a child is born, and so starts the head to head battles of two very strong willed and stubborn people.

Jack has no intention of changing his ways just because he is married, but he realizes after a time that no woman compares to Fiona in his mind, including his weird fixation with her blue leather half boots. Not even the beautiful Lady Featherton, his mistress, compares to the passion he feels with Fiona, and he breaks if off with Lucinda immediately upon his return, angering the lady to seek revenge. His old life of late nights is set aside for evenings in with his new wife, usually spent in bed. Over time, the two realize they can't live without each other, but both are too proud to admit it to the other. Both notice a change in themselves they had not expected. After a threat to Fiona's life, Jack realizes he would do anything to keep her safe, and realizing the extent of his feelings for her changes him completely. They set off to Scotland for a friend's wedding, intent on protecting Fiona, and the baby that they both suspect is on the way. There they discover their true feelings for each other, in light of traumatic events.

I did like this book, including the constant references to the MacLean curse, where the four MacLean brothers show their tempers through the weather, and Fiona is known for her lilac-scented rain. Poor Jack is chased around by his own little black rain cloud when he deserts Fiona for the gaming hells, instead of staying at home and in their bed. It is a constant struggle between the two as they almost try to one up each other, but it makes for an amusing read all the same.

The sex scenes (I can't bring myself to call them love scenes) are intense and many. The sparks between the two characters are blatant and they seem to happen mostly after an argument, or on one of trips Fiona makes to the gaming hells to prove her point to Jack. He has an unnatural fixation with her leather half boots, and despite that being a bit weird, it does lend a certain "air" to those scenes.

The one thing I noticed that wasn't rectified was the ending of the curse. It is stated that the MacLean's must do an unselfish deed to rid themselves of the curse, but it is never said if Fiona, by marrying and putting an end to the feud, has ended hers.

This was book one in Karen Hawkin's The MacLean Curse Series, according to her website.
Posted by Unknown at 3:35 PM