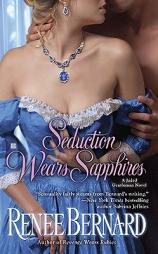 In this second installment of Ms. Bernard's Jaded series, we are re-introduced to Ashe Blackwell, another former East India company man with a secret. Held captive in India for a year with the other members of this "club," he escapes with them back to England. They take with them horrible memories of torture and death, as well as a treasure of priceless jewels, found in their dungeon cell. While danger follows some of  them back, they all choose to ignore it. Ashe, scarred by a love affair in India gone horribly wrong, tries to forget by living a life of debauchery. As he takes this to a new level,  his grandfather becomes concerned. As heir to the Blackwell fortune, Ashe needs to toe the line and when he is summoned back to the ancestral home, he learns he must straighten up and fly right for an entire Season, or he will be disinherited. In order to accomplish the goal of keeping tabs on his grandson, Gordon Blackwell enlists the aide of his best friend's daughter, American Caroline Townsend, for the task. Caroline is looking for an escape from her strict aunt and impoverished upbringing, and sees the task and the £20.000 Gordon dangles before her as the perfect opportunity to bring her dream of founding a woman's college to fruition.  In a twist for a historical romance, she becomes HIS chaperone.

When Ashe learns that this uncouth American spinster, with her drab wardrobe and unbridled tongue, is to be his watch dog, thoughts of rebellion take root. For outward appearances, Caroline is presented as his ward, and he as her guardian. It's an interesting plot twist that causes a bit of confusion at first, as I had to remind myself who was watching who. And of course, Ashe starts to see something in Caroline that was not apparent at first. She is intelligent, can hold her own in a conversation, has a quick wit and above all, shows Ashe a hidden glimpse of herself when she sleepwalks. Yes, that is correct. Caroline sleepwalks, and when she does, she has a tendency to visit Ashe in his room while leaving her inhibitions back in hers.  We get to watch Ashe as he fights his demons, but finally succumbs to love. It would be nice, however, if he told Caroline how he really felt. Both of them dance around the truth for a good part of the story, and it's only a threat from an outsider that finally forces  them to realize just how much they stand to lose by keeping themselves invincible to hurt.

Ms. Bernard writes her Jaded series with both strong female and male protagonists. There's also an abundance of, shall we say, interesting encounters of the bedroom variety. This formula makes for a more than satisfying resolution when the last page is turned. I'm looking forward to the next in the Jaded series, and I have a feeling that story will belong to Darius Thorne, Ashe's best friend and fellow member of the club to which none of its members really want to belong.
Posted by Debra at 6:10 PM