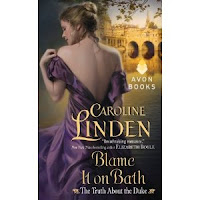 Blame it on Bath is out on February 28, 2011. I look forward to reading elder brother and heir, Charles' story. I've found that this novel is incrementally better than the previous one. If that continues to be the case,  the last in this series will surely not disappoint, especially since Charles has the furthest to go to redemption.
Posted by Debra at 8:00 AM