Any Man of Mine by Rachel Gibson 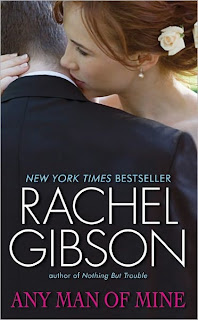 This installment of Rachel Gibson's hockey players of the fictional NHL Seattle Chinooks series focuses on long time player (in more than one sense of the word) Sam LeClaire. As the book starts we find him attending the wedding of Ty and Faith, two characters from a previous book in the series. His ex-wife, Autumn Haven, is the wedding planner which takes him by surprise since they haven't seen each other in over two years. They share a five year old son, Connor, and to spare him the baby mama drama of which they have a great deal, they agree to pass him back and forth through Sam's assistant.

To have a good romance one must have believable conflict. Autumn and Sam have believable conflict in spades. Sam is quite possibly one of the most unlikeable Heros in any romance I have ever read. The couple got married in Vegas after knowing each other for five days. Autumn has fallen head over heals for the hottie hockey player but after their drunken Elvis impersonator wedding and unfortunate name tattoos (tattoo shops really should have Breathalyzers) he splits in the morning without a word and starts divorce proceedings. When she tells him she is pregnant, through his lawyer since he won't give her his cell number, he demands a paternity test before he will take any responsibility or even see the baby. Yeah, he's a real winner and only goes downhill from there. He likes his hockey rough, his women brainless, big boobed and undemanding, and to see his son only when it is convenient which isn't very often. He supports Connor financially but sees him rarely often canceling on him at the last minute. So it is no mystery why Sam is not Autumn's favorite person. He wasn't mine either.

If one is going The Reformed Rake route the reformation must be believable and credible. Did Sam get there? Maybe. In the beginning he has the maturity and self-awareness of a three year old. Gibson gives him a painful back story to try give us a reason for his bad behavior and soften his toolishness but for his amount of narcissism and selfishness it falls a bit short. He finally decides that maybe Autumn is right and he has been a pretty uninvolved father and his son is getting old enough to notice. He decides that he will change his ways and spend more time with Connor and thus spend more time with Autumn. As his priorities change so do his feelings about Autumn.

I really liked Autumn. She was strong and capable and very protective of her son. She had to be. She always tried to keep the drama of his parent's relationship away from Connor after a particularly bad fight that he witnessed when he was three. She never ran Sam down to Connor and tried to make credible excuses for him when he would cancel at the last minute. She put Connor ahead of her own feelings and anger which scores major points with me. What I didn't understand was why she would go down the relationship road with Sam again. He didn't have to do too much to earn a second chance either when this is one Hero who should have been put through a wringer twice to get his second chance. That is why I'm not sure if he is completely reformed. He didn't have to work very hard for it. I might trust him again after two years but not two months. This is one book where I thought that if he became a good father and lived his life in a more responsible manner and Autumn found a different man who was worthy of becoming part of Autumn and Connor's family, I would have considered it a happy ending.

I have liked all of Rachel Gibson's books including this one, and even though I found Sam pretty self-absorbed and not worth Autumn's emotional energy through most of the book I couldn't put it down. There were moments of levity too. On Halloween Autumn wears Sydney Crosby's hockey sweater because she thinks the penguin is cute. The effect this has on Sam is hilarious. Connor is also written very well without being too cutsie or precocious. I hope they live happily ever after, but I kind of think they may be happy for right now. It would be great if Rachel Gibson writes a book in the series that gives us a glimpse of them in the future and they are happy.

I'm a hockey fan (Go Stars!) but you don't have to be to read this series. Sam does have some pretty strong opinions about Sydney Crosby so Pittsburg fans have been warned. I took my lumps when John from Simply Irresistible expressed some not so kind opinions about Mike Modano.
Posted by Kristin H at 5:19 PM