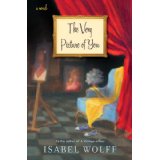 Utilizing wonderful secondary characters, each with their own story to tell, including a family that, while not dysfunctional could certainly use some lessons in honesty and communication, Isabel Wolff has written a worthy follow-up to A Vintage Affair, also reviewed here at Bookishly Attentive. On sale in hardcover on October 4, The Very Picture of You is a must-read for anyone looking for a moving family story that paints a beautifully vivid picture with words.
Posted by Debra at 4:42 PM