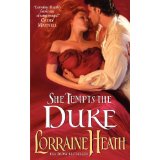 They called them the Lost Lords of Pembrook.  They are in reality three young men, one meant to inherit a dukedom, who disappeared years ago only to reappear twelve years later to claim the inheritance their unscrupulous uncle wants to take from them. Sebastian, the 8th Duke of Keswick, was 14 when his father died and his uncle locked him, his twin brother Tristan, and his younger brother Rafe in the tower at their ancestral home of Pembrook.  Uncle David's intent was clear. He would murder the three as he had murdered his own brother and assume the title for himself in retribution for his brother marrying Sebastian's mother.

Lady Mary Wynne-Jones, 12 year old neighbor, best friend to Sebastian, and daughter to the Earl of Winslow, overhears David's plans and manages to free the young lords. The boys then disappear into the night, each to live the next 12 years in their own exiles of hell before they come back together in dramatic fashion in order to take back what's rightfully theirs. In the escape, they leave Mary behind. She in turn, suffers her own form of exile when her father finds out exactly what she did that night and why.

Lorraine Heath's characters are horribly scarred psychologically by their ordeal. Sebastian even carries these scars as a physical manifestation, which adds to the dark undertones running rampant through this ultimately wonderful love story. The entire second half of the book is devoted to what we hope will be Sebastian's ultimate redemption, and the beating back of his demons and his unnatural need for retribution. Mary tries to break through the wall that surrounds this damaged grown up little boy, but it's only when Sebastian realizes what truly matters, that she succeeds. But will that realization come too late?

In the first of  a series of three novels, Ms. Heath takes us to the darkest reaches of despair and makes us wonder if perhaps this is the first time we will read a novel in this genre where a main character is so far  beyond all repair.  And seeing how this novel turned out, I can't help but hope that Tristan and Rafe's stories will follow in very short order. Published February 1, 2012.
Posted by Debra at 7:24 AM