The Unseen, by Katherine Webb 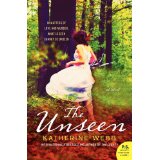 Downton Abbey has revived interest in the early 20th century, that time before the fabric of life in England was ripped apart by two world wars.  I usually don't read novels set in this time period, though I'm not sure why, but I'm glad I picked up Katherine Webb's latest endeavor.

The Unseen is the story of more than one main character, and more than one time period. Set a century apart, the two stories converge with one dead World War I soldier, found well preserved in the muck of Ypres.  Leah, a journalist, is called upon by her ex-boyfriend, Ryan, who works to identify war dead, to uncover the identity of this soldier, so next of kin can finally notified and the body returned home. What Leah finds 100 years after the fact is enough for her to get over her humiliation at the hands of her former boyfriend, write a book and find a new love of her own in Mark Canning, great-grandson of one of the main protaganists of the story.

If this sounds complicated, it's really not. What it really is, is a mystery.

Cat Morley is imprisoned in 1911, for the crime of being an "active duty suffragette." Caught with a rock intended for a milliner's window during a protest, she is sentenced to prison. Upon her release, she is sent to Cold Ash Holt, and the Rectory, to work as a housemaid and regain her strength. She meets Albert Canning, her new employer and the vicar of the parish, and his wife Hester.   Life is hard here, but good. She meets a man she falls in love with, and she also meets Robin Durrant, a self-proclaimed theosophist, who arrives when Albert claims he's seen fairies in the nearby water meadows.

The undercurrents in the household are strong. Things are not what they seem between the newly married vicar and his wife, and Robin throws the household into turmoil with his arrival and his hold over the vicar. When pictures are taken of a "elemental," or a fairy, in other words, things come to a dramatic conclusion for the Rectory's occupants.

Using two time periods works very well here. Leah meets a descendent of the Cannings, and together in 2011, they work toward solving the mystery of what happened in 1911. Once done, the identity of that soldier becomes clear, and the story ends happily for Leah. In that, we are reminded that 100 years before, the same cannot be said for the inhabitants of the Rectory.

The novel is extremely well-written, the characters fleshed out just enough for you to guess the truth about them, and there are many truths to ferret out. I love a novel that makes you think for yourself, and this is one of them. I highly recommend it.