The Frog Prince, by Elle Lothlorien 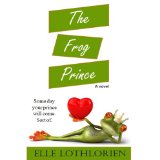 My favorite type of escapist reading is a long, contemporary novel,  well-written and filled with laughable moments. Imagine my surprise when a free Kindle offering turned out to be just that. Elle Lothlorien has written a gem of a story, with bits and pieces taken from fairy tales and woven into a totally unbelievable but quite enchanting premise.

Leigh Fromm is an intelligent, well educated young woman who happens to work as a sex researcher. Her job thankfully, is really not the main focus of the story, but does allow for some humorous moments.  Ms. Lothlorien leaves that focus to the male protagonist, Roman Lorraine, also known as the "almost" King of Austria. Roman was born and raised in the United States, as part of the exiled royal family of Austria. Never thinking that his title would mean anything beyond some privileges in some higher circles, he makes a life for himself by building treehouses (and donating the profits to charity) and ballroom dancing.

He meets Leigh at her Great Aunt's funeral in Denver, Colorado, and they start on a lovely courtship. Leigh is a beautiful woman, but she constantly reminds us that she feels socially awkward, with a propensity for saying the wrong thing at the wrong time. The first person narrative endears us to her, as she constantly wonders what Roman, tall, blue-eyed, rich and gorgeous, sees in her. She is by turns hysterically funny and unusually wise. Leigh's character, as written, is really what makes this book hum.

Halfway through their slow and steady courtship, the impossible happens. Leigh is thrust into the role of every girl's wildest dream, and Roman becomes the one thing he never thought he would be.  Their lives are turned upside down, and outside forces work to keep them apart.  Leigh and Roman try to find a way to live their own personal fairytale, with heart-melting results.

I admit, I am a sucker for a good love story, and this is one good love story. While totally implausible (or is it, really?) the author lets us imagine what it would be like to be live the life that very few people actually get to live. With more than a few laugh out loud moments, she makes it quite entertaining too. I highly recommend!
Posted by Debra at 10:39 AM