Faking It, by Cora Carmack 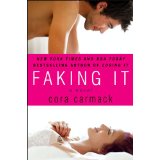 I'm never one to turn away a good book, even if the genre (in this case, New Adult) is not usually my cup of tea. However, after reading her first book in this series, I was begging to find out what happened to Bliss' best friend from Losing It.

In Faking It, Cora Carmack's follow-up to Losing It, Cade Winston gets his star turn. After confessing his undying love to his best friend, Bliss, and then losing her to someone else, Cade finds himself at odds with himself and life. Living in Philadelphia and attending grad school for drama, he's in the same city with Bliss and her boyfriend (and former teacher, Garrick), and the city has never seemed so small. With no where to turn to escape his disappointment, his luck turns when Mackenzie (Max) Miller spies him in a coffee shop, and at the spur of the moment, asks him to play the role of boyfriend in order to placate her parents.

Max is unlike anyone he's ever met before, and perfect Cade is thrown by his immediate attraction to her. Max, a musician, is  heavily loaded down with baggage from her past, and as she strives to make a name for herself, she fights what she feels for Cade with the belief that she's toxic to anyone around her. The attraction between them is too strong yet in order to be together, these two have to overcome their pasts and accept that they are deserving of a happy ending.

Ms. Carmack tells the story from both Max's and Cade's points of view in alternating chapters.  It's an effective method that gives us a deeper understanding of just what drives these characters. I don't think the story would have had the same punch if it were written in the third person, or from only one point of view. And some of the lines that Ms. Carmack assigns to Cade even had me swooning. How could Max possibly resist when this thought is running through Cade's head. "I pulled her into my arms and she cried until the events of the morning disappeared, until the present took a backseat to the past. And until I knew I couldn't live without her." Sigh.

Wonderful story, terrific writing. Read Losing It first, however. Also very well-written, it's as romantic and heartwarming as Faking it, and you get a pretty good idea of where Cade is coming from. Highly recommend.
Posted by Debra at 8:00 AM