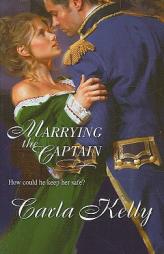 This is the first Carla Kelly book I've read, and it won't be the last. I have the two sequels on order, and look forward to re-visiting with Nana and Oliver in those.  For a quick read, almost innocent in its story-telling and characterizations, Marrying the Captain is a sweet diversion.
Posted by Debra at 11:15 AM