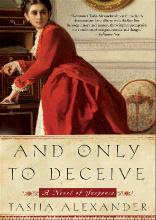 I liked this book very much. I enjoyed Tasha Alexander's voice and characters. Emily, who I did not care for much at the beginning of the book, grew on me as she continued to evolve and mature. She had her moments of knuckleheadedness but overall she was likable, and I cared about what happened to her. One of the strongest parts of the writing was the excerpts from Philip's journal. It really let the reader get to know him. It felt like we were sharing Emily's journey of discovery along with her. I look forward to reading the next book in the series.
Posted by Kristin H at 11:47 AM