Persuade Me, by Juliet Archer 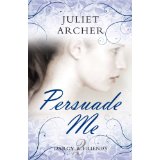 Persuasion is my favorite Jane Austen novel. How many times have I re-read Frederick Wentworth's letter to Anne Elliot? How many times have I thought that if Anne and Frederick would just TALK to each other, everything would turn out just fine?  In Persuade Me, Juliet Archer's wonderful modern adaptation of the novel that defined first love and missed opportunities, the story is brought up to date and the result is a thoroughly enjoyable read that can stand on its own merits, even for someone who has never read a word of the original.

Dr. Rick Wentworth, an English expert in marine biology based in Melbourne, Australia, has written a book and is in England to promote it. A Steve Irwin-type adventurer (with much more sex appeal), Rick finds the time to visit his sister and her husband and is drawn into the drama of the families surrounding Kellynch, the seat of the 8th Baron of Kellynch, Walter Elliot.  Anna Elliot, a lecturer in Russian literature and Walter's semi-estranged daughter presently living in Bath, has reason to follow Rick's career.  Anna and Rick share a past. Ten years prior, at eighteen, Anna fell in love with Rick, but when he asked her to go with him to Australia, she was persuaded by her godmother Lady Russell and her father, to give Rick up.

All of our favorite Austenite characters grace this adaptation. There's the Musgrove sisters, one of whom Rick seems to favor, Mrs. Smith (now Anna's landlady and best friend), Sir Walter and his daughters Mona and Lisa (love those names), Lady Russell, William Elliot-Dunne (still as slick and smarmy as his Regency predecessor), two Mrs. Clay characters, Lady Dalrymple, Ben Harville and even James Benwick. They are all transported seamlessly into the modern world.

The main premise of the entire story, the Elliot family's role in Rick and Anna's original breakup, translates very well and is just as believable in a modern context, as in the original.  In the original, Wentworth's lack of money and position led to her family's stance. In this adaptation, it's Anna's youth, and the thought, hammered home by Lady Russell,  that her mother (had she lived) would have wanted Anna to wait, to go to University and make something of herself first, before she committed to a serious relationship. All powerful means of persuasion for a young, sensitive teenager living in the 21st century.

There are some things that don't translate as well at first glance, however. The dysfunctional nature of Anna's relationship with her family is a bit harder to understand when put in the modern day context. Why does Anna put up with Mona, her younger sister? Why does she even talk to her father let alone run to him when he snaps his conceited and self-important fingers? Why does she let Lisa, her elder sister and Walter's pet, run roughshod over her feelings?  In the original, I really had not given this much thought, except to say, it was her duty as a daughter and sister to put up with her family's baggage. In modern times I'm asking why Anna feels the need to be a doormat. I just want to shake her! But that really makes her awakening at the end of the book so much better. You can feel Anna coming into her own, just as she finally realizes that her future can be as bright as her past.  She finally pushes back at her family, and is rewarded with what she's wanted for ten long years and was afraid she'd never have. So in the end, even these issues do not matter. That's how good this book is.

Juliet Archer has written a gem that even non-Austen fans would love. The fact that I spent the entire book comparing it to the original and wondering at the ingenious way the author turned Regency situations into contemporary ones, speaks to the creativity involved in writing it. From the foreword (written by one, Will Darcy) to Rick's heartfelt, beautiful love letter to Anna, Persuade Me is an Austen adaptation worth writing home about. Persuade Me is the second in Ms. Archer's Darcy and Friends adaptations. On sale September 15th and published by Choc Lit, it's a must-read for fans of either Jane Austen, contemporary romance or both.