One Night in London: The Truth About the Duke by Caroline Linden 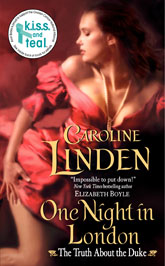 The first in a series, One Night in London: The Truth About the Duke is the story of Edward de Lacey, one of three sons of the Duke of Durham, and their combined fight to refute a claim by their father on his deathbed that he was married twice, quite possibly committing bigamy. This confession basically negates the de Lacey sons' claim on the dukedom, leaving Charles Lord Gresham and heir, Edward, the spare and manager of the estates, and Gerard, the youngest who is in the military, illegitimate.

Edward de Lacey has a reputation for being cold and efficient. He begins the search for an attorney who will contest any and all claims to the dukedom in court and in so doing, snatches the best one from the hands of Lady Francesca Gordon, a widow with legal problems of her own concerning the custody of her niece. When faced with what she feels is the attorney's perfidy in dropping her case, she takes it out on Edward, and the sparks immediately fly. Edward, an engaged man, is nevertheless fascinated by Francesca. His engagement is soon over, however, when he's faced with his intended's disloyalty in the form of a scathing story in a gossip rag. When Francesca tells him she can get a retraction, Edward agrees to help her find her niece and a bargain is struck.

The story line is wonderful, and fully engages the interest of the reader. Edward's troubles are real and complicated, but the best part of this book is watching Edward deny his attraction to Francesca in too many ways to count. She's the exact opposite of what he would look for in a relationship, and he cannot believe he is attracted to her, but when he finally realizes that he's in too deep, the romance blooms and we see the kind of man he really is.  Francesca, for her part, fights the attraction on the basis that Edward is well above her own station. I would have liked to see a better explanation of her first husband's demise, however. There are some questions remaining about that and I'm not sure those will be answered in the remainder of the series, which is too bad. Something is just not right there, and we are left hanging for the answer.

There are some other interesting points the novel brings out. We see examples of the treatment of women by professional men of that era when Francesca endeavors to hire an attorney. And even with Edward's help, the discrimination is blatant. We are also treated to an explanation of primogeniture as the de Lacey's struggle to hold on to their inheritance. But with all this, One Night in London is a romantic romp  and the ending, while tying Edward and Francesca's love story up neatly, leaves the main problem that brought them together, still unresolved. Will Charles, Duke of Durham pick up the reins? And just what trouble has Gerard got himself into? Luckily,  I suspect we will find out soon enough.
Posted by Debra at 1:07 PM