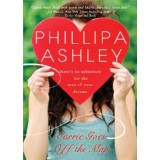 
Carrie Goes Off The Map is published by Sourcebooks, due out December 1, 2011. I'd love to see  this one into a made for TV movie. Any plans  for that, Phillipa?
Posted by Debra at 7:36 AM