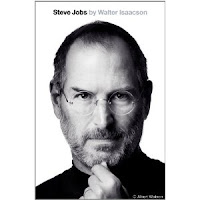 I was returning from a vacation in London and happened to have some time to kill in the departure lounge at Heathrow.  Steve Jobs had passed away just two weeks prior and this new biography by Walter Isaacson had just been published. I couldn't resist the half-price sticker on this huge 571 page book so I bought it, not stopping to figure that with the conversion it cost more in London than it would have at  home, even at half price. Not only that, but I now had to carry this huge thing onto the plane and through immigration and customs when I could have just as easily bought the e-book. No matter. It was worth every pound/dollar and  inconvenience it caused. This book is a must read, and once I started it, I could not put it down.

Walter Isaacson paints a brutally honest picture of the late Mr. Jobs. No holds are barred and no stone is left unturned in the journey through a life that started with birth parents giving their son up for adoption, then later marrying each other and having another child. The author goes on to paint a picture of a  childhood filled with curiosity, spunk and inquisitiveness. There's one particular story of a young Steve, perhaps in the 8th or 9th grade, who was working on a science project for school. When faced with the need for a certain part for what he was building, he wrote Mr. Hewlett, of Hewlett-Packard, directly and requested it. Not only was the part sent, but it garnered him a summer job at a local HP plant, a harbinger for things to come.  Mr. Isaacson relates the birth of Apple Computers in Jobs' parents' garage and describes not only the timeline of his subject's life, but the relationships between Mr. Jobs and his contemporaries that developed along the way. I was endlessly fascinated with the stories of Jobs' relationship with Bill Gates, for example. There are hundreds of such stories scattered throughout the book. Mr. Jobs was not known for his diplomacy as a boss or even as a human being and Mr. Isaacson does an excellent job of putting the reader in the place of the hapless employees or acquaintances (and there were many) who somehow managed to incur Steve Jobs' wrath and ridicule. All the better for understanding that while Steve Jobs was an innovative genius who guided Apple and Pixar to unbelievable success, he happened to have a problem dealing with those who did not live up to his standards, or those whom he thought betrayed him in some way. He was also emotional, crying when things didn't quite go his way, and was known to hold a grudge when the situation warranted it. And sometimes when it didn't.

Mr. Isaacson describes Jobs' eight year fight against pancreatic cancer in candid detail, and his audience feels his family's horror as Steve decides to forgo what his doctors felt may have been successful treatment by surgery for experiments with herbs and diet for 9 months before finally assenting to the procedure. By then, the cancer had spread, and the rest is now, thanks to the author, well-documented history.

Isaacson had Jobs' full cooperation in the writing of this book, and it shows. Nothing is white-washed, and it comes across as an honest and thoroughly open account of this amazing man. For the first 200 pages, this reader couldn't stop wondering at how Jobs' got away with some of the things he did. For want of a better word, the man was truly an ass. But then, something happens and by the 300th page and beyond, I couldn't help smiling in places at his antics, because, say what  you will about Apple and Steve Jobs, the man knew his business. He knew how to get the best out of his employees and knew exactly what his consumers wanted before they knew themselves. And that is the mark of a true business genius. It's no wonder that with every public appearance that revealed him as a sick man, Apple stock would fall. When you read this book, whether you own any Apple products or not, you realize just how much of Steve Jobs went into everything and anything that company has produced. The next time you're in an Apple Store, look down at the floor. If it's blue tile, Steve Jobs picked it out. His hand was in everything, and undoubtedly, he will be sorely missed. Just how much is made clear in this wonderful, fast-paced biography. I highly recommend it.
Posted by Debra at 1:32 PM