Trouble at the Wedding: Abandoned at the Altar by Laura Lee Guhrke 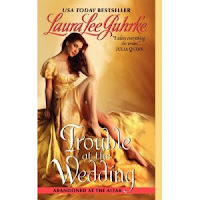 At the turn of the last century, it seemed American heiresses with money to burn and British peers with a burning need for that money, married. Ms. Annabel Wheaton, a Southern heiress whose fortune originated in her daddy's gold strikes, finds herself in this situation. But to her, marriage to a peer is a way to finally be accepted after a hardscrabble upbringing in the backwaters of Mississippi. As the novel opens, she is set to marry Bernard Alastair, the fourth Earl of Rumsford. But as fate (and historical romances) would have it, a monkey wrench in the form of Christian Du Quesne (pronounced DuCane, thank you very much), the Duke of Scarborough, appears. The ensuing love story is typical of Laura Lee Guhrke's writing. That is to say, it's full of romance, reforming rakes and hot nights in interesting locations. Trouble at the Wedding, another offering in the Abandoned at the Altar series, does not disappoint.

Christian, dead set against remarrying and a confirmed rake to boot, is asked by Annabel's Uncle Arthur to put a stop to her shipboard wedding to the Earl. Christian complies as a way to earn a good deal of money and assuage his guilty conscience over the death of his own American heiress wife 15 years before. The doubts Christian plants in Annabel's mind regarding life as a member of the British ton are  far-fetched, but they begin to take hold. Annabel starts to have serious doubts about her impending marriage. After a scene innocently reminiscent of that famous cargo hold scene in Titanic, The Movie, Christian stands up at Annabel's wedding and declares (loudly) that he knows why these two cannot be joined together. When the entire wedding guest list assumes Christian has compromised the bride before her wedding to another man, Annabel hatches a plot to save her reputation and to avoid marrying a very reluctant Christian. She appoints him to be one of her guardians and a trustee of her fortune, thereby explaining his performance at the wedding in an entirely different way.  The plot then moves to London, where the two of them become closer than any guardian and ward should be.

Trouble at the Wedding is a fun romp through Edwardian England seen through a Southern belle's eyes. The requisite rake is reformed and redeemed through an unexpected love, and a girl looking for acceptance finally finds it in the arms of a man who she never expected could love her back. All in all, like all of Laura Lee Guhrke's novels, it's a wonderful ending to an utterly endearing story. Due out on January 1, 2012.
Posted by Debra at 7:00 AM