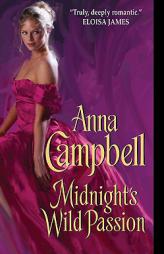 Anna Campbell always throws a monkey wrench into my belief that historical romances should revolve around an unrepentent good-natured rake and a smart heroine who sees through him to the good hiding inside.  In Midnight's Wild Passion, our rake, Nicholas Challoner, Marquess of Ranelaw, doesn't have any good inside. In fact, his heart is so black, so twisted with revenge brought on by the ruination of his favorite sister at the hands of a family friend (and a very bizarre upbringing as a child) that our skin crawls with revulsion whenever he appears. Ranelaw has masterminded a plan to exact revenge for his sister. He will ruin the daughter of the man who ruined her. What he doesn't count on is Antonia Smith, chaperone extraordinaire. She's wise to his rakish ways, if not the reason for them, because she's a ruined woman herself. Ten years ago, as Lady Antonia Hilliard, she followed her heart and was  betrayed first by the man she loved and then by her family. Her relative, Godfrey Demerest, takes her in, and the circle is complete because he is the man to whom Ranelaw has sworn revenge.

When Nicholas sets his sites on Godfrey's daughter, Cassie, Antonia intervenes, only to fall under his spell herself. To Nicholas, however, what he feels for Antonia runs deeper than anything he's ever felt in his life.  His moral awakening is an integral part of the novel. His slow realization that he may be a better man than he thinks he is leads us to believe that we will get the rake to reform. But prior circumstances do not permit Antonia to believe in him. Her rejection sends him into a tailspin of epic proportions, and we watch his disintegration with a sinking heart. As he spirals downward, Antonia mourns the man she thought he could be. It's painful to read, but it will hopefully make the redemption, if it comes, that much sweeter.

Midnight's Wild Passion is a wild ride, indeed. Anna Campbell wrings every emotion out of her characters and her readers will feel the same.  Her gifted writing is sensual, emotional, and simply draws us into the characters' lives.  I was left drained and then exhilarated by the time the last page was turned. It's rare that a romance novel has this effect, but it's something I could definitely get used to.
Posted by Debra at 8:00 PM