A Night to Surrender, by Tessa Dare 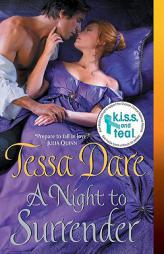 When I know a new book is the first in a series, I play a game. As I read, I try to figure out which characters will be the next to have their own story. In Tessa Dare's new novel, A Night to Surrender, it's anyone's guess as the story is full of colorful secondary characters who would each be worthy of their own spin-off. But first, there's Susanna Finch, the daughter of a military inventor, and Lt. Col. Victor Bramwell, career soldier. These two meet up in a most unusual way. Let's just say the sparks fly quite literally from the beginning of their acquaintance and from then on, Bram, as he's known, earns the nickname, "sheep bomber." No animals are harmed in the telling of this story, however. It's just a novel way to get the main characters together in a hurry, and it's one that will leave you laughing, as you do throughout their story.

Bram meets Susanna on his way to beg her father a favor. He needs to use Sir Lewis Finch's persuasive powers to get his command back after he suffers a leg injury. What Bram gets instead is a title, that of Lord Rycroft  and a castle which has seen better days, about 500 years ago. He also gets an assignment to gather a militia in the town of Spindle Cove (also known as Spinster Cove for reasons which become readily apparent). Once that happens, he is told his command will be restored. Susanna is threatened by the presence of Bram and his men in her quaint town. Spindle Cove is a repository for young women with social problems; these women are  there because their families have no other idea what to do with them.  These women are also Susanna's friends, and the presence of virile, young officers (and two Lords in particular) begin to pose all kinds of problems.

Underlying this is the attraction between Bram and Susanna. While there is tension between the two of them, they quickly learn to work together, and they become so in tune that each knows what the other needs before they themselves figure it out. Their relationship is quite different than what I'm used to in this genre, in a good way.  Filled with humorous touches  (an example of which is the scene where Bram tries to ask Susanna's father for permission to marry), A Night to Surrender is a fast-paced love story that leaves you wanting more. And more is definitely what we will get with the two books to follow. My only question is this: Will we be seeing Colin Sandhurst, Lord Payne, fall under the spell of a certain eye-glass wearing rock collector, or will we see the taciturn Thorne loosen up a bit with the only musically inclined young lady in Spindle Cove? Or will it be Dr. Daniels who meets his match? Such fun trying to guess! And the best part is that we will get to revisit with Susanna and Bram again.  This book goes on sale, August 30, 2011.
Posted by Debra at 8:48 PM