In the Arms of a Marquess, by Katherine Ashe 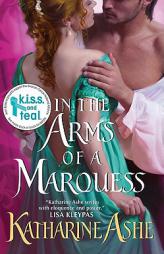 With more intrigue and emotion than I have experienced in a book in a very long time, Katherine Ashe gives us the story of Benjirou Doreè, half-Indian son of a English nobleman, and Octavia Pierce, a wayward and outspoken English girl, who, at 16, is sent to live in India with her aunt and uncle.  Upon her arrival in Madras, Ben saves Tavy from an attempted kidnapping, and the seeds are sown for an infatuation that lasts seven years. In those seven years, Ben and Tavy never forget each other, and on one occasion, that of her 18th birthday, they come perilously close to fulfilling their dream of being together.

Of course, this story would be short indeed if things ended happily ever after at this point. But we know that's not quite how novels go. After they are discovered together by her aunt, Octavia is taken north and Ben is sent away. He  returns to England at the death of his uncle and years later, becomes the Marquess after the deaths of his father and two older half brothers. With money, land and resources at his disposal, he involves himself in a lifelong quest to stop a common practice in the English maritime trades. While Ben quietly makes a name for himself, Octavia remains in India, unable to forget the dark eyed boy she loves. Returning to England, she finds the enigmatic man Ben has become very different from what she remembers, but the spark is still there. And what a spark it is. There is one scene, that of their first kiss upon being reunited, that fairly makes the page sizzle. And the only thing that happens is a kiss. It could end right there, and I'd be a happy reader.  Luckily, though, Ms. Ashe continues her story. Octavia and Ben fight their way through lies, innuendo, fake betrothals, murderous slavers and false friends to find their way back to each other. This time for good, we hope.

Katherine Ashe's In the Arms of a Marquess is filled with wonderful secondary characters that add to the fun. It's written in intelligent prose that flows effortlessly from one page to the next. It reaffirms both the belief in love at first sight, and love conquers all, a  tall order for a romance novel.  I loved it from beginning to end, and so will you. On sale September 1, 2011.
Posted by Debra at 7:16 PM